MicroLean Lab, a public-private consortium that includes Richemont, is developing the microfactory of the future; a concept that has the potential to transform our economic and social organisation right down to how we consume. Welcome to the world of artisanal industry, where the customer truly is king.

For the past century and a half, and the start of the industrial age, production has been dominated by the same model: standardised items are mass-produced, stored at great cost, then sold to a maximum number of consumers by manufacturers eager to recoup investment in expensive machines and turn a profit. Constantly optimised, supply-side economics make use of neuroscience and behavioural analysis – tracked by big data – upstream to estimate demand, then run vast marketing and communication campaigns downstream to bring products to consumers’ attention and into their shopping cart. The risk being unsold inventory. But what if there were another way? A model that would literally turn the value chain around, replacing a top-down system where consumers are “fed” products with a bottom-up system where demand is initiated by the consumer. It’s what could come out of a concept for an autonomous, connected microfactory that is currently incubated at MicroLean Lab, a public-private consortium of Haute Ecole Arc (HE-Arc) Ingénierie, a Swiss engineering university, and some fifteen Swiss companies that include ETA and Richemont.

Launched in July 2019 with its first partners and officially opened in October this year, MicroLean Lab is developing a microfactory that promises to spark a maxi revolution. Speaking at a Société Suisse de Chronométrie symposium in September, Philippe Grize, who is the dean of HE-Arc Ingénierie, described the project thus: “Imagine a microfactory capable of incorporating apps using a business model that emerged ten years ago with the smartphone. Now imagine that these apps are manufacturing, assembly and quality control technologies that are easily configured to match the component to be produced. And what if, instead of amortising the cost of these technologies over ten years, the creators of these apps were paid based on a machine-as-a-service model.”

The entire concept derives from the digital realm.

The prototype microfactory takes the form of a wooden unit with modular compartments. Each compartment houses a technology block, which can be a five-axis CNC milling machine (for example the Micro5, first presented by HE-Arc in 2016), a 3D printer, a cleaning station, a precision turning unit, or a unit that inspects the appearance or dimensions of the finished part. All these tools are programmable and interconnected. Robots travel between compartments to transport raw material or finished parts, or to carry out assembly and maintenance. “The entire concept is derived from the digital realm,” says Max Monti, who is head of partnerships and development at MicroLean Lab. “The infrastructure is the smartphone, the interconnected technology blocks are the apps, and standardisation of the manufacturing process, represented by the robots, is the operating system.”

The return of the farmer-watchmaker?

At this stage, the idea that a finished micromechanical object – a watch, for example! – can be made inside a single wood cabinet is astonishing enough. The possibilities the concept opens up for industry are even more extraordinary, as they could radically transform our social and economic organisation, and our consumption habits.

First of all, these units take up less floor space – five times less than the conventional equivalent – and use ten times less energy, meaning industry could relocate to city centres or even villages, marking the end of sprawling peri-urban industrial zones and daily commutes. Certain technology blocks could even be set up at home. This relocating of industry closer to where we live and buy fits with the shift towards local consumption. A twenty-first century equivalent of the farmer-watchmaker?

The idea is to empower the end customer.

Secondly, new technologies such as machine learning, artificial intelligence, the Internet of Things and blockchain have the potential to change business relations between industry players. Currently, manufacturers produce and sell machines to other manufacturers at high prices. Their business depends directly on the state of the economy. Tomorrow, these same manufacturers could continue to supply machines but instead be paid per part made or per hour – this is the machine-as-a-service solution that functions in exactly the same way as an app that’s free to download with paid-for services.

For this transformation to succeed, organisational silos would have to be removed and equipment suppliers, contractors and brands form a network. Should the watch industry get onboard, having put is culture of secrecy to one side, this new model could turn the value chain upside down. Digitisation in a context of Industry 4.0 can transform the B2B2C model – that feeds the product to the consumer – into a C2B2B model. The idea being to empower the end customer whose order remotely triggers a process whereby flexible, interconnected enterprises manufacture custom products on a large scale: a sort of artisanal industry. 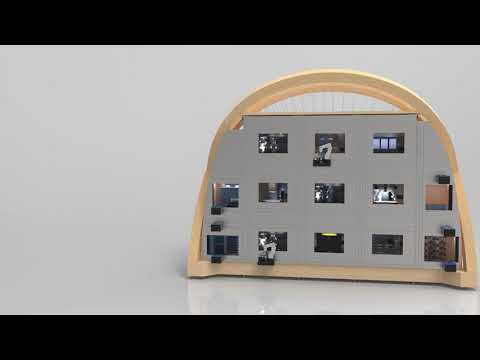 The health crisis and climate change have further underlined the problems thrown up by globalisation, from broken-down supply chains to strains on the economy and society. The microfactory isn’t a silver bullet but it is a means towards a form of rebooted, relocated industry that is more efficient, more sustainable and better for the environment. And which puts the consumer at the centre of its economic model. The future is just beginning…