Of all the inventions that have helped improve the precision of mechanical watches, none is more important, or less well-documented, than the development of the regulating organ. To help bridge that gap, we retrace the history of escapements from the earliest devices to the very latest silicon regulators. Part eight: dual impulse and pivoted detent escapements.

In 1789, the first year of the French Revolution, Abraham-Louis Breguet proposed an original and no less complex detached escapement. This échappement naturel or natural escapement differed in that it had two escape wheels providing two impulses per oscillation directly to the balance. Force is transmitted from the gear train to the balance exactly as with a detent escapement, but at each vibration (as with Mudge’s escapement) rather than the once per oscillation of a coup-perdu or “lost beat” detent escapement. More efficient, Breguet’s system failed to catch on, being too complex to build and impossible to regulate at a time when watchmakers were looking for mechanisms that could be easily and identically produced on a mass scale. However, as technology progressed, the advantages of such a system became of interest again. 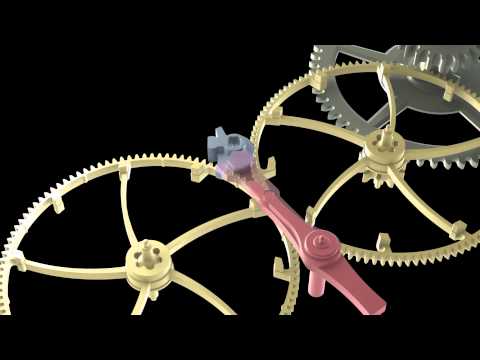 A plethora of dual impulses

The Dual Ulysse escapement, a modern take on the natural escapement with its radial thrust, was introduced in 2005 inside the Freak watch. This being Ulysse Nardin, silicon features prominently within the mechanism, which delivers a double direct impulse to the balance. François-Paul Journe equipped his Chronomètre Optimum with a patented High-Performance Bi-Axial Escapement or EBPH, also with double direct impulse and requiring no lubrication. Journe being a man who knows his classics, he succeeded in designing a direct impulse escapement that doesn’t need to be “kickstarted” as does a detent escapement. He also combined his escapement with a remontoir d’égalité so that the energy delivered to the balance is always the same. This maintains high chronometric precision with no variation in torque whatever the state of wind.

The natural escapement is susceptible to knocks and sudden movements.

This type of regulation has other fans. Laurent Ferrier recently presented his interpretation with special gears and a silicon isolator. Independent watchmaker Kari Voutilainen has also developed a version of Breguet’s natural escapement, in 2011. His Vingt-8 watch has two escape wheels that provide direct impulse to the balance through a roller. Between them is a small lever controlled by a “dart” which prevents the system from spinning out of control at the slightest shock. It should be noted that the natural escapement is susceptible to shocks and sudden movements which can cause the balance to knock or to skip teeth, with the risk of breaking the pivots. Kari Voutilainen’s innovation ensures greater precision but remains complex to make. Hence why this type of regulator is still hard to implement on an industrial scale.

Nor is it an isolated case. In 2005 Breguet presented a prototype detent escapement of which no trace remains. The following year, Jaeger-LeCoultre introduced its Isomètre à Ellipse or isometric elliptical escapement inside one of its most fabulous creations: the Reverso Grande Complication à Triptyque. This curiously-named mechanism is in fact a sort of reworked detent escapement, in which the impulse is delivered once per full oscillation and as briefly as possible. The pivoted detent is widely regarded as the best and most frequently used variation of this type of escapement. But like the classic natural escapement, detent escapements don’t take kindly to shocks and sharp movements. Which is why wristwatch manufacturers have passed up on a mechanism that is otherwise highly regarded in terms of chronometric precision.

Thanks to the Isomètre à Ellipse, Jaeger-LeCoultre overcame this problem with a new pivoted detent escapement which indirectly unlocks. Adapted to wristwatches, it retains the system’s positive features with none of the negatives. Only 30 of this assembly, whose premature demise we can regret, were made. It comprises four parts: the escape wheel, the roller, the blocker arm and the blocker or pivoted detent in horological parlance. For the isometric elliptical escapement to function perfectly in all positions and withstand shocks, the blocker arm and the escape wheel are made from monocrystalline silicon. This escapement, which was never reprised after 2006, also has the advantage of requiring no lubrication, a consequence of its geometric properties which are those of a marine chronometer detent. Rumour has it that Rolex filed a patent (US 2008/0279052A1) in the United States in 2008 for an innovative escapement. But this, of course, is nothing but conjecture…

Another option watchmakers have explored is to fuse the resonance system and the natural escapement. Rudis Sylva, a small independent brand, worked along those lines for its Harmonious Oscillator, devised by Mika Rissanen. The regulating organ, assembled on a single plane, comprises two balances whose springs breathe asymmetrically in all positions. The two interlinked balances mesh one with the other and vibrate at the same amplitude. Average rate is therefore immediately corrected by mutual compensation, allowing optimal adjustment.

As part of a tourbillon, the two balances would enter into mechanical resonance (see also the resonance systems by F.P. Journe and Armin Strom which use traditional lever escapements). Another recent watch to be fitted with a dual balance but regulated by a single Swiss lever escapement is the Royal Oak Double Balance Wheel which Audemars Piguet presented in 2016. This original regulating organ is designed to resolve problems of stability by incorporating a second sprung balance on the same axis. This patented “dual balance” geometry delivers significantly improved precision and more stable performance.