A CNC machine that delivers the same quality as one which uses ten times more space and energy was the centre of attention at the EPHJ trade fair in Geneva. The environmental benefits could be huge.

Now that it’s here, it’s a wonder no-one thought of it before. First revealed in April at SIMAS, the trade show for microtechnology production, then singled out for the Jury Prize at the EPHJ industry fair, Micro5 has been winning fans – and admiration – wherever it goes. Whereas other CNC machines are the size and weight of a car, this five-axis machine tips the scales at 35kg and is no bigger than a coffee-maker. The prototype, which was developed by HE-Arc Ingénierie engineering school in the Bernese Jura in Switzerland, combines elements of Industry 4.0 with the microfactory and its emphasis on careful resource management.

It was time we adapted the size of CNC machines to the size of the objects made.
Claude Jeannerat

“Only 50% of the energy consumed by existing CNC machines, which take up several cubic metres of floor space, actually produces shavings; the rest produces heat,” says Claude Jeannerat, a teacher at the school. “It was time to adapt the size of the machine to the size of the objects made.” And so Jeannerat and his team set about creating a five-axis machine capable of producing a 50-mm cube with a minimum power supply and no loss of precision. Preliminary studies calculated a 1:5 optimal ratio between the size of the part and that of the machine structure. Accordingly, the prototype now doing the rounds is barely bigger than a coffee-maker and only needs 500 watts of power, via a 230V plug, compared with 25 to 30 kW for the mastodons in use today.

As obvious as the idea may seem – neither electricity nor square metres are getting any cheaper – getting there wasn’t easy. Certain details had to be revised first to obtain a surface roughness of 50 to 100 nanometres. “We had to recalculate algorithms,” says Claude Jeannerat. “On a heavy machine, the spindle makes a backward movement when it accelerates. Not on Micro5. This meant we had to adapt to the machine’s size and behaviour.” The fixed spindle rotates at the double-quick speed of 60,000 rpm but doesn’t generate excessive heat, thereby eliminating lubricant. The part is mounted on a moving platform which positions the five axes. “The surrounding air maintains the miniature machining station at its optimal temperature. Simulations have shown that the machine reaches its working temperature within five minutes, compared with several hours for a machine weighing over a tonne.”

When you have the highest costs in the world, you have to think smart!
Philippe-Emmanuel Grize

The project was developed as part of the EcoSwissMade programme, initiated by the Engineering and Architecture Faculty at Western Switzerland University of Applied Sciences and Arts (HES-SO). The programme aims to significantly reduce energy consumption in Swiss industrial production, both in making and using machines. Much is at stake: “One objective is that Switzerland should continue to produce these tools,” notes Dean of Faculty Olivier Naef. Micro5‘s greatest potential, however, lies with its space-saving and energy-saving capabilities. “Our micromachine is a step closer to microfactories, which open up new possibilities for redeveloping industry in peripheral zones, and in doing so can help resolve the problem of commuter traffic,” enthuses Claude Jeannerat. Philippe-Emmanuel Grize, who heads the Engineering department at HE-Arc Ingénierie, takes a pragmatic view: “When you have the highest costs in the world, you have to think smart.”

There are alternatives. Additive manufacturing technologies such as selective laser sintering and electron beam melting, while not yet widespread within the watch industry, are developing fast and offer similar advantages. “Subtractive technologies, which remove material, still have a future,” comments Denis Jeannerat, technical manager at Willemin-Macodel which built the Micro5 prototype. “They offer numerous advantages such as quality surface roughness, less need for polishing and finishing, and process robustness.” 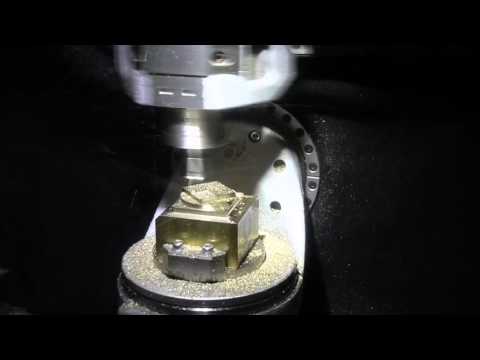 Despite a promising future, Micro5 has yet to go into production. As a public institution, building machines is not part of HE-Arc Ingénierie’s remit. However, interest in the project is such that a technology transfer protocol has been put in place for industrial partners, managed by Association de Recherche Communautaire des Moyens de Production Microtechnique (formerly TT-Novatech), which liaises between manufacturers and users of microtechnology production tools. In the meantime, design and ergonomics students at HE-Arc have been busy imagining new applications for Micro5. These include S Alpha, a micromachine on a compact base, for freelancers, and nine autonomous, interconnected machines inside a single unit, served by a robotic arm. And this is just the beginning…