After several years away, Dominique Renaud, co-founder of Renaud & Papi, has returned to Switzerland with an exciting mechanical movement in his luggage. So what exactly is the DR01 Twelve First?

Luiggino Torrigiani had every reason to believe Dominique Renaud’s idea was worth investing in (see our previous article). The invention he showed him was nothing less than a completely new concept for the balance wheel and escapement, which Dominique believed could replace the traditional sprung balance with Swiss lever escapement – a system still rooted in Huygens’ invention 400 years ago. “Of course we’re seeing things such as the escapement that Zenith recently unveiled, but most of these alternative escapement systems rely on silicon, and can only be produced using high-tech methods that are a long way from traditional horology,” Torrigiani explains. “Dominique’s escapement, on the contrary, can be made using methods that are common in traditional watchmaking. His new escapement can be serviced and, if necessary, repaired by any skilled watchmaker, even generations from now.”

Dominique Renaud’s inspiration came from a Riefler precision regulator from the early 20th century. The upper end of its pendulum bar is borne by a sharp steel blade that rests in a groove made of an equally hard material. The weight of the pendulum is therefore distributed across the thin line of the blade edges. This creates a virtual pivot rather than a radius, as is the case with the pivot of a balance wheel. Dominique Renaud deduced that “if I use blades instead of pivots in a portable watch movement, hence with a better quality factor, it should be possible to use a balance wheel of a much higher mass that would give me greater inertia.” The next step was to transpose the idea into model form (Dominique was, incidentally, one of the first to make enlarged plastic mock-ups of his movements). He started by building a plexiglass model, using the blades from a box cutter to test the validity of this new pivot. Because gravity couldn’t be used to keep the blade in its corresponding groove, he added two opposing blades with the first one positioned in the middle to create a type of hinge. This only allows small amplitudes. Choosing a very low amplitude of 30° makes high frequencies possible, even with a heavy balance wheel.

Instead of a traditional balance wheel, Dominique Renaud came up with a cylinder-like structure with openings so it could be suspended inside the movement; this was the blade resonator. Nor did he leave it there. He also invented an escapement that takes maximum advantage of the large oscillator. It’s a detent escapement that only uses every tenth beat (the other nine are lost) so as to avoid disturbance to the oscillations. A built-in security ensures the escapement is shock-proof, which traditional detent escapements certainly aren’t.

The concept will be tested by twelve individuals who will each invest one million Swiss francs in one of twelve unique timepieces.

“We’re aware that the movement I’ve devised has to be tested and approved. Being a small company, we don’t have the means to produce numerous prototypes to conduct extensive tests, so we decided to make our potential clients part of the development process. We’re going to produce 12 specimens of a highly futuristic watch that shows the wearer every aspect of this innovative movement through a sapphire crystal cylinder that we call the visio-module.” Luiggino Torrigiani picks up the story: “Each person who invests one million Swiss francs in one of these twelve unique timepieces – the ‘Twelve First’ – becomes a supporter and a tester. They will be the ambassadors for our project. Any improvements we make in the course of our research can be applied to the watches as an update. It will take a few years to produce these twelve pieces, during which time we’ll certainly make developments that we will want to apply to the watches that have already been delivered.”

The cylindrical capsule containing the movement is held by a titanium arch that is worn on a strap. Ball bearings mean the cylinder can be rotated even when on the wrist. This allows for contemplation of the finely decorated movement whose baseplate resembles an engine block with the different elements of the gearing arranged around it. One side of course shows the dial. The gear train and the barrel are seen opposite. At a 90° angle are the escapement and a direct-drive seconds-wheel, with the innovative hairspring opposite. Located on the outside of the blade resonator, it also breaks with tradition by being not in the shape of a spiral but a crossbow-shape. 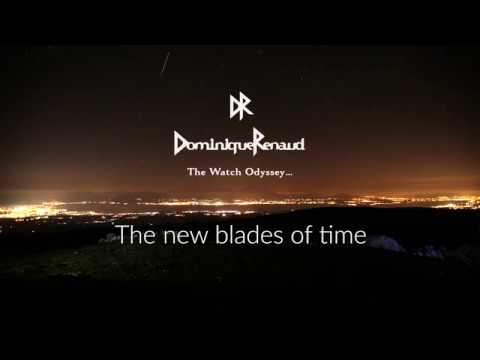 Dominique Renaud has named this timepiece, which look more like a spaceship than an ordinary watch, the DR01 TWELVE FIRST, suggesting he has a few more surprises up his sleeve.

Zenith’s quantum leap
An escapement that swings and sways
The search is (still) on for new escapements
Girard-Perregaux on the importance of being constant
TAG Heuer’s Pendulum does away with the balance spring
Co-Axial, Omega’s primal scream
Freak, made in innovation Watchmaking pioneer Dominique Renaud is back (I) TAG Heuer's Pendulum does away with the balance spring Freak, made in innovation